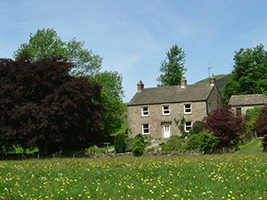 Set at the top of Wensleydale, just beyond the beautiful town of Hawes, Pry House Farm nestles 150 yards back from the A684 road out of Hawes, on your way to Kendal.

The owners, Allan and Jennifer Fawcett, have created a warm and relaxing environment for visitors to enjoy some North Yorkshire hospitality, while taking in the wonderful scenery around the area.

The farm is in a perfect location for walkers who can set off from the cottages and walk a section of the Pennine Way or visit Hardraw Force.

Pry House Farm is a working sheep and dairy farm, so care and consideration should be taken at all times so avoid accident and injury. Because of this, the cottages are unsuitable for children under 12 and no pets are allowed.

Hawes and the surrounding area

We are in the middle of the North Yorkshire National Park, with a number of ancient castles and abbeys in the area. The Lake District is within a 45 minute drive, and Pry House Farm is therefore an excellent base to explore the delightful countryside on either side of the The Pennines. 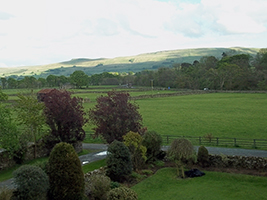 Hawes can be dated back to 1699 and was originally called The Hawes, deriving from the Old Norse word hals, meaning “neck” or “pass between mountains”. Hawes is on the A684 road from Sedbergh to Leyburn which puts it in the centre of a great walking region and the Pennine Way passes through.

Hawes is the highest market town in the country and contains several good country wear shops. Local tourist attractions include the Dales Countryside Museum, based in the old Hawes railway station of the Wensleydale Railway; nearby Hardraw Force waterfall; and the Buttertubs Pass, which links Wensleydale to Swaledale. Further down the dale is Aysgarth Falls. Hawes itself has a regular market, as well as many shops, pubs and tearooms. 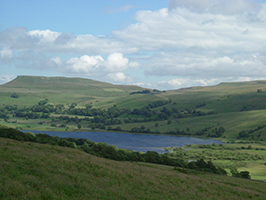 There are a number of interesting and worthwhile places to visit in the local area. The village of Hardraw, a ten minute walk from the farm, has been made famous by the “Robin Hood – Prince of Thieves” film, in which Robin Hood (Kevin Costner) bathed naked under the 98 foot waterfall, Hardraw Force. The highest is found in a gorge behind the village church is reached via the Green Dragon Inn. A 20 minute drive down Wensleydale and you are at the village of Aysgarth, here again the film used the Aysgarth Falls to shoot the fight sequence between Little John and Robin Hood.

The village of Askrigg is also very picturesque. The makers of the T.V. series to James Herriot’s ‘All Creatures Great and Small’ used the village, and much of the the surrounding countryside for their filming. It was this series that put the North Yorkshire Dales firmly on the tourist’s map.